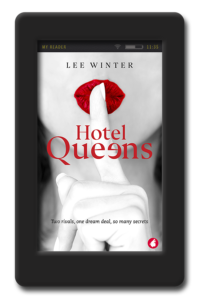 Ice meets fire in this opposites-attract lesbian romance, as layered, sassy, and smart as its characters.

Over one long night at a bar in Las Vegas, two powerful hotel executives meet, flirt, and challenge each other—having no clue they’re rivals after the same dream deal.

Brilliant ice queen Amelia Duxton is a hotel vice president who thrives on control, truth, and efficiency. She’s in no mood for love or the mess it brings. All she wants is to buy the coveted Mayfair Palace—a massive deal that could finally help her land the CEO job in her family’s hotel empire.

Fiery Kai Fisher is charming and chaotic and renowned for closing ambitious deals. Her sights are set on snatching the Mayfair Palace out from under the nose of her hated arch rivals, the Duxton family.

But when secrets emerge and everything starts to fall apart, how can either of the warring women win—especially when they’ve just met their match?

Audible audiobook narrated by Angela Dawe
Note, due to a glitch, if you downloaded Hotel Queens on Audible before July 16, 2021, it was missing chapter 22. This is now corrected. If you were affected, here’s how to fix it.